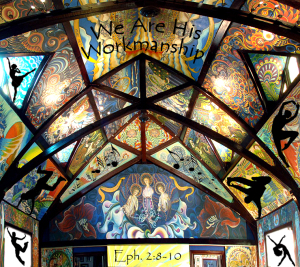 My granddad loved museums. He always took me to them when I was a kid. A few years before he died, we were together, like old times, wandering through the Baytown Historical Museum. The building itself was something of an artifactthe old post office. I still remember my granddad calling to me from across the main gallery. He had found something important he wanted to show me. As I approached, I noticed a pained look on his facenot the pleased-with-himself smile I was used to. As always, I was prepared to learn something; but this time he just stared into the case and pointed to an old faded photograph on the bottom shelf, way in the back. It was a group of ragged schoolchildren in front of an ancient one-room schoolhouse. He pointed to the little boy on the end, in the front, and saidThats me! My granddad liked museums, but Im not sure he liked being on display in one. However, you have to admit, it does point out a very important fact of life: whether we like it or not, we are all a part of history. More so each day we live; for each day, our remembrances flow further back into time past. Yet we should keep in mind, that in the museum of life, our lives are not only history, but art also. And the choices we make in ourstory will determine the quality of our art. Whether the art is a masterpiece or just another bit of kitsch is up to us. It is something we must decide every day.

Kitsch:
A cheap mass-produced work, with characters and actions worse than actual life. Unoriginal and pandering to the popular, it blandly gives us what is overly sentimental and vulgar. In pretentious bad-taste, it reminds us only of the seeming boredom and mediocrity of life.

Masterpiece:
A truly inspired work with characters and actions better than we usually encounter in life. It leaves a lifelong imprint on the memories of those who experience it because it exposes the eternal significance behind our everyday existence and makes common life more uncommon, rich and open.

To me, each painting in the museum is like a windowa window into the imagination of another, showing us the way they see the world. Ive been told such paintings are two-dimensional artflat art. And I suppose sculpture would be three-dimensional artfat art. I even had a professor once who said that architecture was a four-dimensional art because it changes through time (the fourth dimension). He said this was because architecture was the only art form that people actually live in. As such, when our needs change, our buildings change with them.

Up to this point, the dimensional distinctions have been intuitive. However I cannot help but think of what art would be like in other dimensions. One-dimensional art would be a dot, a point, a note; and, as the note moved through time, it would be a line, like the lines of a musical scorelines of sound spun into chords and woven into music. I have even considered the possibility of an art without dimension, a zero-dimensional art. And though this art might be transmitted in symbols or sounds, in itself it would have no manifest existence in the physical world. It would only exist in consciousness, in our mindsnarratives trapped in our neuronslike literature. If so, the stories told around the ancient fires are still preserved in our minds chemical fires. And it is mind itself that creates art. However, consider that there is a dimension of art where mindand the motion it producesare a part of the art itself. It is a living art, what we might call a fifth-dimensional art, defined by souls in motiondance, theatre and cinema.

In all the many dimensions of art, we both mimic and reflect what God has done; in that we create objects of beauty for no other reason than self-expression and pleasure. It is a purely human thing. A beavers lodge may be neatly kept and spacious, but you will not find works of art adorning its walls. Yet we certainly have adorned our world with artworks in the fifth-dimension. In the past, entertainment was a part of culture; today we live in an entertainment culture. We are so surrounded by shows that life itself can seem like a show. When the towers fell, so many people said it was like a movie. Our minds could not easily grasp what was really happeningwatching in our media, thousands of people dying. When everything feels like the movies, we begin to long to know real life. Or in the words of the Goo Goo Dolls: We bleed just to know were alive. If so, then this would also explain the phenomenon of the reality show. But we all know its not real realityjust an unscripted performance. Is it even possible to be real in front of a camera? The camera corrupts life, or at least makes it self-conscious, and, in a very real sense, drains it of reality.

A sixth-dimensional art would take us beyond the show, beyond imitation, to a genuine art. Not just living art, or art involving living beings, but art as the beauty and wonder of living life itself. The post-impressionist artist Vincent van Gogh said: I tell you, the more I think, the more I feel that there is nothing more truly artistic than to love people. This should be especially true for those who follow Christ. For we have a chance to extend our art one dimension more and make ourstory His-story. For we are His workmanship, created in Christ Jesus for good works, which God prepared beforehand so that we would walk in them. In Christ, we are Gods art, a work in progress, His masterpiece. And, one day, He will complete us. But until then, and because of then, why live like kitsch?

This entry was posted in Art, Culture. Bookmark the permalink.