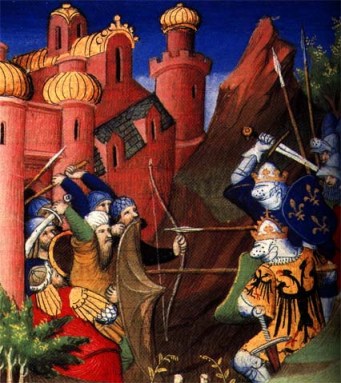 At Red State, Dan McLaughlin suggests an alternative tothe typical way we think about the Crusades.While many think of thewars in terms of Christian imperialism, McLaughlin argues that the Crusades are better conceived as reactions to Muslim imperialism.

His explanation rests on two premises: the geopolicital situation in Europe during the Middle Ages and the history of Muslim incursions into Christian territories in the centuries leading up to the Crusades.

He points out that the Europe of the Middle Ages was far from being a unified empire. Rather, it was a collection of fragmented feudal states incapable of the kind of imperialism and colonialism often attributed to the Crusades.

Hethen remindsreadersthatmany of theterritories we normally associate with Islam today were actually Christian regions before being conquered by Muslims in the Middle Ages. Such a realization helps to put the Crusades in better focus, demonstrating that they were primarily reactionary rather than preemptive.

its worth remembering that the Crusades arose in the late Eleventh Century only after four centuries of relentless Islamic efforts to conquer Europe, and the Christians of the Crusading era cannot be evaluated without that crucial context.

After providing a timeline ofMuslim incursions into Christian territories and ensuing conflicts, McLaughlin concludes with some thoughts worth citing at length.

As has often been noted, the early history of Muhammad as a military leader and Islam as the driving force of conquest is quite different from the early history of Christianity as the persecuted faith founded by a non-violent martyr, and these differing foundations have presented different challenges for Christian and Muslim thinkers dealing with questions of war, peace, and the defense of self and others. That said, none of this is intended to demonize Muslims as uniquely violent in the Dark Ages. Aggressive wars of conquest were the rule throughout the world in those centuries, and have become only fitfully less so into our own age.

But the Crusades did not originate in a vacuum; they were launched in a world where the Roman Empire, the guardian of Western Civilization, had fallen to outside invaders 600 years earlier and European Christians had been on the defensive ever since. The Europe that would stand astride the non-Western world into the middle of the Twentieth Century was still distant in the future. The fearful and divided Christian principalities of 1095 had grown up in a world where Islam, not Christianity, had been the engine of imperial expansion for long before living memory.

Virtually nobody in the West and/or what passes for Christendom today argues that violence can or should be justified on the basis of things that happened a thousand years ago. The insistence of Islamist propagandists on revisiting such ancient history for present-day propaganda purposes should be resisted but it should also be subjected to the corrective of accurate history. And that history is one in which Muslims carried the sword to Europe for centuries before Christian armies took the Crusade to them.

Check out the rest of his article here.

For a more in-depth treatment of the Crusades from a similar perspective check out Rodney Starks Gods Battalions: The Case for the Crusades.

This entry was posted in Religion. Bookmark the permalink.