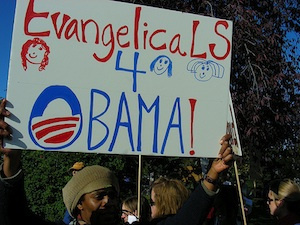 Is the rise of liberalism among young evangelicals a reality or a media-driven myth? Joe Carter and Matt Anderson disagree on the extent of liberalisms popularity among the group.

Since 2007, the media has attempted to present young evangelicals in the Millennial generation (age 18-25) as increasingly liberal on social issues and more likely to vote for Democrats. But a new study by the Public Religion Research Institute confirms that the majority of young evangelicals (or at least young whiteevangelicals) have not abandoned the conservative political (and presumably the theological) positions of their parents.

Of course there remainsas has been the case for at least forty yearsa small number of evangelicals who are both young and liberal. But their number are not increasing substantially, much less nearing a majority. The slow, steady shift of white evangelicals from Democrat to Republican has created a powerful narrative that overshadows the fact that for the last four decades at least one-third of evangelicals have voted for the Democratic Party.

Be sure to check out the rest of the discussion in both of their posts (linked to their names above).

This entry was posted in Culture, Politics, Religion, Uncategorized. Bookmark the permalink.