Through the Broken Looking Glass 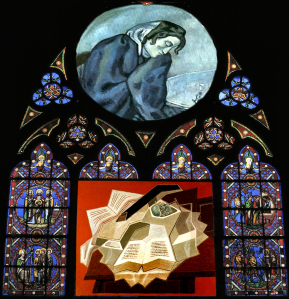 Have you ever seen those old-fashioned, modern-looking paintings? I remember seeing them as prints in dusty flea markets and second hand shops. They fit-in nicely with all the other outdated and broken stuff because, when you look at them, it appears as if you are looking at slivers of the world reflected in the surface of a broken mirror. These cubist works, as they are called, grew out of the fin de sicle (end of the century)the 19th century to be exact. Yet, the fin de sicle is not only a time, but a recurring mood; the feeling that we are looking at a broken world; or we are breaking the world; or maybe it is simply that the instruments we use to see/understand the world are broken. It is this last possibility that I often recognize in cinematic iconography [The Battleship Potemkin (1925), Beauty and the Beast (1991), Falling Down (1993), The Matrix (1999), The Count of Monte Cristo (2002), Phantom of the Opera (2004), among others]. The idea of a broken world often appears in the icon of a broken mirror or a broken lens in a pair of eyeglasses. A mirrors reflection or a lens refraction shows us the world, distorted even when wholehow much more when these world-seeing instruments are broken.

It is generally acknowledged that Paul Czanne inspired the cubist movement in art with his words: Everything in nature takes its form from the sphere, the cone and the cylinder. The salient point seems to be that complex objects are constructed of very simple underlying geometries. As such, the cubists were simply trying to see below the surface of things, deep into these foundational geometries, to bring them to the surface of the canvas. In so doing, the objects themselves become obliterated into a fragmented wilderness of perspectives. Every time I think of this concept, I see the cubist frog from my biology class. You may have seen it too. Its framed in its tin dissecting pan, matted with black wax. Its skin pinned back, exposing its viscera which is thoroughly saturated with formaldehyde and dyes to preserve and give color to all the organs. The science teacher told me this was a frog and I believed him. I should have known better. It was only a fin de sicle, positivistic, cubist froga dissected frog.

Nowadays we dissect everything, even bookspinning back their covers and dying the ideas with our highlighters and marginalia, neatly cataloging and labeling all its useful facts as positions and propositions to be defended or defeated. I have to be very careful I dont become so concerned with dissection, too eager to show the organs, that I miss the message; even more so if its Gods messageGods Book. More and more I find myself living in this dangerous cubist wilderness of opinions and perspectives.

I have found that nothing it is more dangerous to ones faith than the work of an apologist. No doctrine of that faith seems to me so spectral, so unreal as one that I have just successfully defended in the public debate. For a moment, you see, it has seemed to rest on oneself: as a result, when you go away from the debate, it seems no stronger than that weak pillar. That is why we apologists take our lives in our hands and can be saved only by falling back continually from the web of our own arguments, as from our intellectual counters, into the Reality.

–C.S. Lewis From ChristianApologetics into Christ Himself (1945)

This essay has somewhat of a cubist feel to it So let me get to the point. All our world-seeing instruments are broken, along with our souls. Thats the very reason we need the message of the Book. In our alienation from our Creator, we naturally bring to the surface our underlying nature; and in so doing we fragment and dissect our lives. We may move in our dissecting pan when the electrodes are applied, but we are still dead. Thats the broken-glass Bad News. Now the stained-glass Good News: Our Creator and Re-Creator God, Jehovah Charash, takes our ploughed, dissected lives, cleaved by our own choices and lovingly cleaves the broken glass together into a beautiful translucent masterpiece of glowing broken shards. Each fragment, useless in itself, fits perfectly into the beautiful whole which tells the story of Christ and His saints. As a man broken from birth, I say, I once was broken glass but now Im stained glass and I will let the Light of the World shine through, so that the works of God may be displayed in me. (John 9)

Heavenly FatherMay Your light shine out of my darkness. Im Gideons lamp. Break the glass if necessaryso the world may know Your power; and by it come to see You and all Your world, not in broken mirrors and lenses, but face to Face.

This entry was posted in Art, Culture, Philosophy, Theology. Bookmark the permalink.