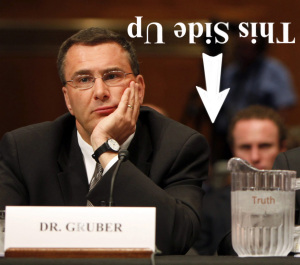 Lack of transparency is a huge political advantage. And basically, call it the stupidity of the American voter (gooberness) or whatever, but basically that was really really critical to get the thing (Obamacare) to pass. And, you know, Its the second best argument. Look, I wish Mark was right, that we could make it all transparent, but Id rather have this law than not.[1]

It was a refreshing moment of transparency about the lack of transparency. But it was only a moment. When such truthtelling about lying finally made it into the news cycle, the lying truthteller said that the truth he told about lying was off-the-cuff. And I suppose if off-the-cuff means unprepared then indeed it was off-the-cuff because you dont need to prepare to tell the truth. Transparency is easy. On the other hand, when you want to mislead, that takes some planning. Being opaque takes organization. Lying takes time.

Prevarication, obfuscation, darkeningthat is what we are getting nowadaysanything and everything other than accountability, responsibility, transparency and honesty.

It should remind us all of this important truth about lies: Remembering truth is easy, it is natural because it is what is. Lyingwhile natural to our sin natureis not natural to what is. It is, by definition, the opposite of what is. Thus lying takes planning and organization and continual vigilance. If a liar lets down his guard and speaks off-the-cuff or speaks colloquially[2] the truth will out. And then the liar will have to get back in the game, concentrate, plan and organize his lying about telling the truth about lying. And we will believe it if we are goobers.[3]

Some timely John Adams tweets from the founding of our country:

Abuse of words has been the great instrument of sophistry and chicanery, of party, faction, and division of society.[4] #StopWordAbuse

Facts are stubborn things & whatever may be our wishes, our inclinations, or the dictates of our passion, they cannot alter the state of facts and evidence.[5] #TruthWillOut

Power always thinks it has a great soul & vast views beyond the comprehension of the weak; and that it is doing Gods service when it is violating all his laws #BenevolentDestruction

Posterity! You cant know how much it cost this Generation to preserve your Freedom! Make good use of it. If not, Ill repent that I took Pains to preserve it #WastedFreedom

Colloquial means familiar conversation rather than formal speech or writing (clear, understandable conversation=not prepared or planned out). Is it just me or is there some strange force at work in the universe to have a person named Josh (to joke ) Earnest (to be truthful) involved in this obfuscation.

[3] I think he thought we were supposed to interpret off the cuff as being incorrect. In subsequent congressional hearings Dr. Gruber has confirmed that it was in fact incorrect (He lied about telling the truth about lying). Gruber had plenty of time to prepare, but still could not answer Congressman Gowdys simple question of what he means when he says voters are stupid. Gruber said he didnt mean anything by it. Gowdys question is an interesting one because if the law must be tortuous and opaque to keep the voters from knowing whats in it, then the voters are not stupid. They are smart enough to figure it out if you dont lie to them. Even though Gruber cannot find what he meant by it, I can find two possible meanings of his calling voters stupid and yet lying to keep them from figuring it out: 1. The voters are too stupid to know what is best for them (whatever the liar wants see John Adams quote at end of post) and 2. The voters are too stupid (read trusting) to know that they are being lied to. In any case, after the moment of transparency about a lack of transparency we were plunged once more back into things opaque and oblique and in the congressional hearing it just becomes insanely repetitive and obtuse (and by obtuse I mean stupidity about stupidity). https://www.youtube.com/watch?v=bMb3gn3YunE

[5] John Adams, Argument in Defense of the British Soldiers in the Boston Massacre Trials, Dec. 4, 1770.

This entry was posted in Culture, Current Affairs. Bookmark the permalink.